Important note: The texts and photos offered on Birds-Online.de regarding the health and diseases of birds are meant as a source of information. Please always take your ill birds to an avian vet as fast as you can!

This page shows some of the many different faces of PBFD (Psittacine Beak and Feather Disease) as they may appear in adult birds. The pictures demonstrate how different the courses of the disease can be in individual cases and what the different stages may look like. They also demonstrate that birds who seem to be healthy can be unnoticed carriers of Circoviruses, which are responsible for the disease PBFD.

All birds featured on this page have been tested positive for PBFD at least once. As part of a rescue mission, they had all come into the care of animal welfare workers and were cared for together.

Asymptomatic carrier of the virus 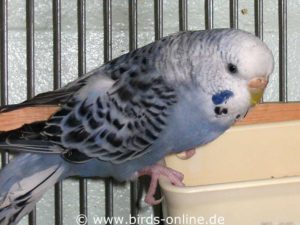 The female budgie Schlupp did not show any visible symptoms of PBFD when she came into our care. Nevertheless, the test was positive. The animal thus carried the Circoviruses and was a potential danger for other birds not carrying the virus themselves.

Asymptomatic carrier of the virus 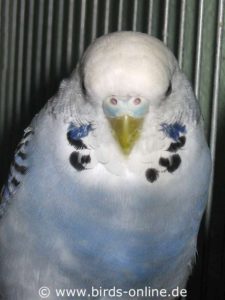 The female budgie Morani was not visibly ill herself, but nevertheless carried the viruses. Only the slightly peeled-off upper beak (mandible) could have been an indicator of the disease. But such splintering can also be seen in healthy, uninfected birds who have fought with a conspecific. Therefore, such splintering is quite normal in birds living in a very large flock with many opportunities for interaction with other birds. So little wear on the beak alone is not necessarily evidence of PBFD infection. 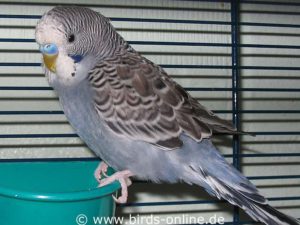 The male budgie Sam came into our care at the age of about four to five months. He must have fallen ill shortly before and not already when he was still growing in the nest because in this case, he would most likely have died months ago. The flight feathers on the left wing were lacking, on the right wing, they were largely present. Apart from that, Sam’s plumage was fully intact and he did not show any claw or beak growth disorders. 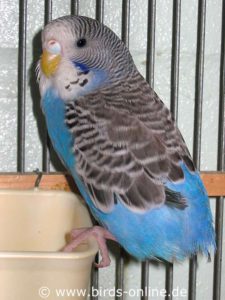 Houdina also arrived in our care at the age of about four to five months. Like Sam, she probably fell ill with PBFD after leaving the nest box, because otherwise, she would very likely not have survived the infection while growing. Houdina’s large feathers, i.e. the tail and flight feathers, were almost absent. A few flight feathers on one of her wings were twisted, shaggy, and considerably too short; they barely stood out among the smaller wing feathers.

Addendum, March 2007: Houdina moved to a PBFD-positive flock of budgies. She quickly settled in and her feathers grew back so that she was soon even able to fly. She then looked like a healthy, regular budgie, but she was still carrying the virus. 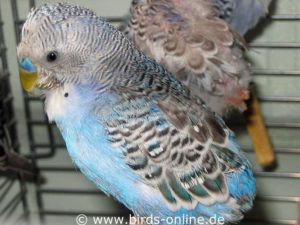 The adult male budgie Frodo showed an advanced course of the disease. All his flight and tail feathers were lacking so that the wings looked very short. Frodo was also lacking some feathers on his face and head. Besides, all small feathers covering his rump looked disheveled and stringy. Some of the feathers on his head seemed to be sticky, but they were actually not.

Infected bird with feather loss on his head 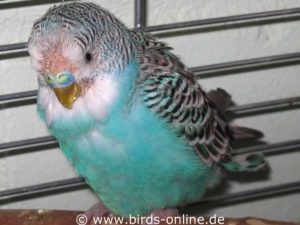 Although the small feathers covering the rump of adult male budgie Paddy were intact and he even all flight and tail feathers were still there, the disease was written on his face. There were bald patches on his face, especially on his forehead. Besides, Paddy was extremely underweight, indicating a chronic disorder affecting the gastrointestinal system, which in turn may have been directly related to the weakened immune system caused by the PBFD disease. 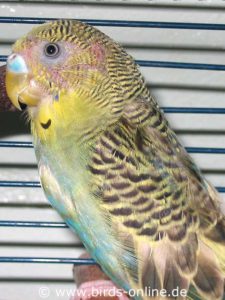 When Amy arrived in our care, she was already mature. Her flight and tail feathers were partly missing, the plumage covering her rump was fully intact. There were bald patches on her face and head. It was also noticeable that Amy’s cere (nose) was coloured light blue instead of brown. This indicated that she was suffering from a hormonal disorder due to her illness. In this way, her body openly displayed her poor state of health. 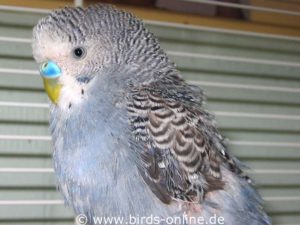 When we took over Balou, he was seriously ill. He suffered from an infection of the central nervous system and, as a result of the neurological disorders, he could not keep himself on his feet due to the severe trembling and his problems with balance. Fortunately, this disease could be cured without leaving any paralysis or neurological damage. Nevertheless, Balou was handicapped all his life because due to PBFD he had no flight and tail feathers. His plumage covering the rump was dishevelled and fibrous as a result of the disease. Regrettably, Balou died before we could find a new home for him. 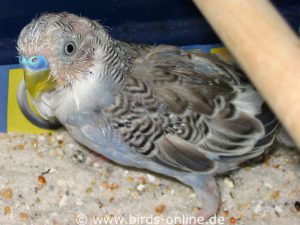 The male budgie Tom was heavily affected by the disease. When he arrived in our care, there were no flight and tail feathers left. Besides, he showed bald patches on his head. Severe inflammation of his airways was also present. Fortunately, thanks to antibiotic treatment, it healed rapidly. After his friend Balou died, Tom seemed to be very depressed, I guess because he was grieving for him. A short time later, the poor little guy died as well. 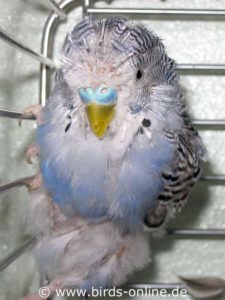 He was active and bold. If one should have inferred his state of health from his behaviour, one would certainly not have taken the male budgie Aragorn for a seriously ill individual. Nevertheless, his PBFD infection was already in an advanced stage when he arrived into our care. He suffered from major feather loss, all flight and tail feathers were missing. On his head, the feathers appeared to be sticky. On the beak, there were several lesions. 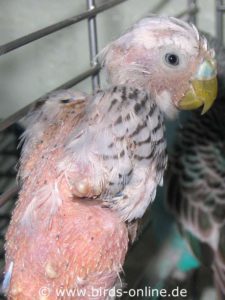 The female budgie Eve showed an advanced stage of disease when she came into our care. She was almost naked due to feather loss affecting her entire body. In some places, as a result of the PBFD infection and the associated loss of plumage, feather cysts and purulent skin infections had developed which had not been treated by the bird’s previous owner. Eve’s beak showed nicks, grooves and chipping. 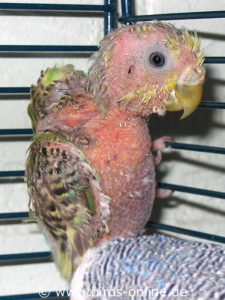 As with Eve, the female budgie Ayla was also in an advanced stage of the disease. Despite being naked, this budgie lady was active and cheerful. Fortunately, she did not suffer from inflammation of the skin or feather cysts. However, her beak was not in perfect condition, as evidenced by fine lateral nicks on the edge of the upper beak (mandible). 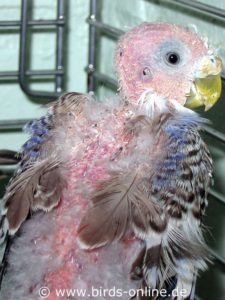 When Lizzy came into our care, she, unfortunately, was in very poor condition. The PBFD infection had attacked her body broadly and weakened her immune system immensely. She was suffering from significant feather loss and her beak was porous and brittle. She also suffered from constantly recurring infections of the digestive tract. Although we tried to help her, one morning she was lying on the cage floor breathing heavily and semi-conscious. Lizzy was euthanized that day.